FOR PRESENTATIONS, PDFS AND OTHER INFORMATION ABOUT THE EVENT.  CLICK HERE. 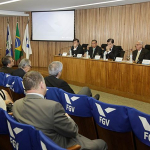 FGV/EPGE - Brazilian School of Economics and Finance - held the seminar "Brazil of Tomorrow" - a tribute to Professor João Paulo dos Reis Velloso, economist and professor at the School since 1964. The seminar was attended by his presence and also, by personalities and experts in economics and development, many of them his former students, professors and researchers of FGV.

Divided into panels that addressed economic development and socioeconomic inclusion, seminar was attended by prof. Marcelo Neri, president of IPEA and minister of Strategic Affairs, by Fabio Giambiagi, Head of Market Risk of BNDES, by IBRE researchers Fernando Veloso and Regis Bonelli, by the president of International Business Consulting Inter.B, Claudio Frischtak, by Claudio de Moura Castro , expert in education, by Marília Pastuk, coordinator of the National Forum “ Favelas as Opportunity” and by Naercio Menezes Filho, professor at Insper and USP.

In his speech, Carlos Ivan recalled moments while student and remarked the importance he exercised both in his professional life and in the history of FGV. "I am a former student influenced by his calm and gentle way. FGV prides itself on its history connected to this professor - which is the biggest title that we can give to him, "he said.

Rubens Cysne talked about the proud school has on performing the tribute, "which recognizes the great merit of João Paulo dos Reis Velloso" and Aloisio Araujo talked about the role of prof. Velloso in the education of students from FGV / EPGE - that privileges, beyond economic theories and mathematics, thinking about Brazilian issues.

Marcelo Neri stressed the youthfulness of the creator of Institute of Applied Economic Research (IPEA). "He never stopped being a student, constantly seeking knowledge. And it is very Brazilian, it is optimistic "- joked, referring to research about Brazilian's future happiness.

Prof. Velloso was minister of Planning and also created the Brazilian Innovation Agency (FINEP - Former Financier of Studies and Projects) and the Brazilian Center for Managerial Assistance to Small Businesses (current Sebrae). Currently, he chairs the National Forum, which seeks solutions to development issues in Brazil. It is also Member of the Board of Economic and Social Development, within Brazil´s Presidency - CDES.