For presentations, PDFs and other information about the event click here. 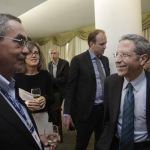 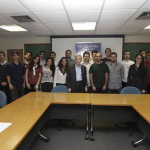 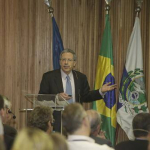 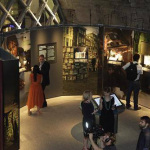 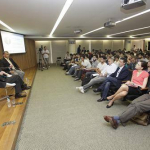 In the context of his visit to the Getulio Vargas Foundation, resulting from an initiative of the Nobel Prize Dialogue and Nobel Inspiration Initiative - a global program that brings Nobel laureates to study and research centers around the world to engage young scientists, the scientific community And the general public - the FGV EPGE Brazilian School of Economics and Finance received on March 13, 2014 the Nobel Prize Eric Maskin for a series of events that involved students and teachers of the School and other guests of the Getulio Vargas Foundation.

On the morning of March 13, at 10:00 a.m., the seminar given by Maskin was directed to undergraduate and graduate students in FGV and other institutions, as well as other guests, bringing research on the design of mechanisms - by which Was laureated alongside Leonid Hurwicz and Roger Myerson. The theory formulated by the three economists allows a better understanding of the functioning of the markets by distinguishing between situations in which markets function well and those in which they function poorly.

On the afternoon of March 13, Eric Maskin attended a panel discussion with a group of 21 undergraduate and graduate students from EPGE. At the time, our students had the opportunity to get to know the awardee more closely, through questions about academic career and research areas.