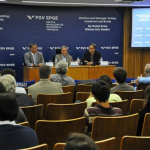 US economist Eric Maskin, winner of the Nobel Prize for Economics in 2007, visited yesterday, July 28, the FGV  EPGE - Brazilian School of Economics and Finance. He attended a luncheon in the Salon Nobre with the presence of President Carlos Ivan Simonsen Leal, Vice President Sergio Franklin Quintella, FGV EPGE director Rubens Penha Cysne, the other directors and faculty of FGV units, as well as authorities and External guests. After meetings with undergraduate and graduate students, and with FGV EPGE faculty, Professor Maskin gave the lecture "Election and Strategic Voting: Condorcet and Borda".

During the event, he analyzed from a theoretical point of view, electoral systems adopted in most countries for the election of presidents, senators and deputies and presented his studies that investigate the properties of these systems to determine which would be the most desirable. According to him, "Condorcet" and "Borda" are the best methods to prevent the "strategic vote", which occurs when the voter votes in one candidate to avoid the victory of another, even preferring a third.

In the presentation, Maskin criticized the electoral system, as it is implemented in Brazil and France, with a two-round vote, and defended the "Majority Rule" or "Condorcet" system - by which voters list all candidates by Order of preference. The winner will be the one who, according to the ranking, is preferred over the others in a one-on-one comparison.

The event with the Nobel of Economy happened in the headquarters building of the FGV, in the Beach of Botafogo, 190 - Rio de Janeiro.

Check the repercussion in the press: