How to Avoid the Next Financial Crisis 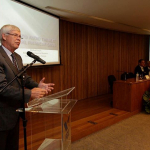 In the context of its 50th anniversary, the Graduate School of Economics of the Getulio Vargas Foundation (EPGE / FGV) received on August 31 the visit of the Nobel Prize in Economics and Professor of New York University, Robert Engle to A lecture on one of his most current topics of study: "How to avoid the next financial crisis?".

In his brilliant lecture, the economist presented a model developed by his team from the Volatility Institute affiliated with New York University to measure the systemic risk of financial institutions. When asked by the press, Engle said he does not know the economy of Brazil, of which he is only an "interested observer". It believes that the country is one of the "miracles" of the last decade in terms of growth, but that it is not immune to risks. "The biggest concern is that this is happening too quickly, and that infrastructure and institutions can not keep up."

Coordinator of the event, the Director of EPGE / FGV, Professor Rubens Penha Cysne, pointed to the more conservative regulation of the financial market in Brazil as a learning of the anti-inflation period, but also drew attention to current problems related to the growing nationalization Of credit.

More than 200 people were present among members of the governing body and different units of the FGV; Market professionals; Students and journalists.

Check out the repercussion in the media: