FOR PRESENTATIONS, PDFS AND OTHER INFORMATION ABOUT THE EVENT. CLICK HERE. 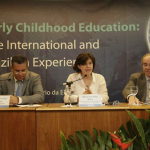 In the context of its 50th anniversary, the Graduate School of Economics promoted the "Early Childhood: The International and Brazilian Experience" conference on 26 and 27 October. The event was coordinated by Professor Aloisio Araujo, and was attended by the Nobel Prize in Economics James Heckman.

During the two days of the event, the speakers presented and discussed themes related to early childhood education, defending their importance in the early years of childhood. According to the director of the Brazilian Academy of Sciences, Luiz Daividovich, during the opening of the event, "improving the education of our youth is essential so that Brazil can play its leading role on the world stage.".

Together with Daividovich, the opening table was composed by the Vice-President of the Getulio Vargas Foundation, Sergio Quintella; The Secretary of Basic Education of the Ministry of Education, Maria do Pilar Lacerda Almeida e Silva; The Director of EPGE / FGV, Rubens Penha Cysne and the coordinator of the event, Aloisio Araujo.

At the opening, Professor Rubens Penha Cysne highlighted the seminal contribution of Carlos Geraldo Langoni, former Director of EPGE, in the 1970s, placing education as one of the main explanatory factors of the poor distribution of income in Brazil. He also recalled that, in the 1980s, the work of the current FGV President, Carlos Ivan Simonsen Leal, in co-authorship with Sergio Ribeiro da C. Werlang, pointed to much greater returns in basic and intermediate education than in education Tertiary (higher). And he reminded to represent, this fact, an important alert to suggest modification of education spending policies in Brazil, which tend to privilege the tertiary sector to the detriment of basic education. Lastly, the Director of EPGE made special mention of Professor Aloisio Araujo's contribution to the training of different generations of EPGE students over the last 31 years, as well as the promotion of events, such as the one mentioned here, of great practical importance for the country.

At the end of the first day, the book "Children's Learning - an approach to neuroscience, economics and cognitive psychology" was also launched, coordinated by Aloisio Araujo and member of the series "Science and Technology for National Development - Strategic Studies" produced From the study groups of the Brazilian Academy of Sciences.