Lecture with diplomat Marcos Azambuja - New rules of the game: The American elections, BREXIT and migration

For news and repercussion in the media click here. 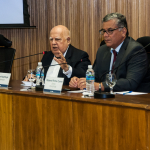 Lecture with diplomat Marcos Azambuja - New rules of the game: The American elections, BREXIT and migration

The EPGE - Brazilian School of Economics and Finance received on November 1st, in the auditorium Eng. M. F. Thompson Motta, former Ambassador Marcos Azambuja. Currently in the position of Consultant of the National Confederation of Commerce, he had prominent positions in the Brazilian diplomacy. He was general secretary of the Foreign Ministry (1990-1992), Brazil's ambassador in Argentina (1992-1997) and France (1997-2003). He also served as the Rio 92 conference coordinator.

Marcos Azambuja spoke about relevant issues in the current international scenario and its possible impacts in Brazil. The diplomat discussed what changes in geopolitics after the USA presidential election, the impact of the British exit from the European and the humanitarian crisis community that led to a wave of migration of refugees to Europe.