President of the European Commission, José Durão Barroso, at EPGE 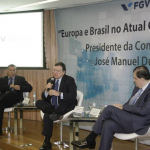 The Brazilian School of Economics and Finance – FGV/EPGE received today, on July 21st, the President of the European Commission, José Manuel Durão Barroso, who gave a lecture on “Europe and Brazil in the Current International Context”.

Durão Barroso started his talk highlighting the position of Fundação Getúlio Vargas as one of the greatest think tanks worldwide. The institution is in the Top 30, according to the Global Go To Think Tanks Rankings 2013, released by the University of Pennsylvania. “It is with great satisfaction, as a Portuguese, to see a think tank from a Portuguese-speaking country reach such a global position”, he said.

The President of the Commission analyzed, afterwards, the current economic scenario of Brazil and Europe, the issues involving the budgetary process in the European Union, besides questions about trade integration. According to him, “the European Union considers Brazil an essential partner”; Durão Barroso also pointed that the EU, as well as the South-American country, is not for beginners – referring to the importance and the complexity of both regions.

He also stated that the European Union is BRICS’ first commercial partner – block consisting of Brazil, Russia, India, China and South Africa – and he also emphasized that the Union has increased its competences over the past four years. “Governments are much more willing to advance integration”, he asserted. At last, Durão Barroso remarked on issues of global concern, such as the crisis in Ukraine and climate changes.

The talk took place from 10h to 12h, in the FGV Headquarters, at Praia de Botafogo, Rio de Janeiro.